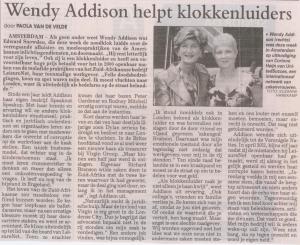 AMSTERDAM – Like no other, Wendy Addison knows what Edward Snowden, who this week blew the whistle on extensive eavesdropping and mail-reading practices, is going through. ´He is literally running for his live´. Wendy is a whistleblower as well and paid a huge price for disclosing the malpractices of her (then) employer, the South African company LeisureNet, in 2000. ´Leading to fierce dead threats, ridicule and scorn. I had to run to London, where I eventually ended up as a beggar on the streets.

Ever since, Addison is running her own company ´Speakup Speakout´. With her knowledge and experience, she wants to render emotional, practical and legal support to other whistleblowers and teach organizations how to encourage employees that report injustice or corruption on the work-floor with support, differently. A unique business-model that is still in its infancy. ´I have to learn how to think commercially and to demand more than what is needed to cover expenses. I still live on social welfare´.

The life of this South African woman could easily serve as a filmscript. She began her career as a ballerina, but due to a serious injury she was forced to stop her dancing career and eventually became an accountant. She climbed the ranks up to board member of LeisureNet. When she discovered her bosses Peter Gardener and Rodney Mitchell to be seriously corrupt, she reported this to the authorities.

Soon afterwards, she, as well as her (then) 12 year old son Dylan, received serious death threats.
Addison decided to run to London. In the British capital, she quickly found employment as treasurer at the Virgin Group. ´But within a year I was fired. Owner Richard Branson wanted to do business in South Africa with the two gentlemen I worked for. There was no deal, as long as I would remain in the Virgin management´, Addison explains.´Of course I looked for legal counsel. But Virgin´s sphere of influence is quite substantial in the London City. Understandably, not many lawyers were anxious to take my case´. Finding another job proved to be virtually impossible. I became known as a whistleblower, and on top of that, I was fired by ´business God´ Branson, adored by friend and foe. Next, due to mounting misfortune, my emotional state of mind did not exactly made me appealing for employers´. In despair, she ended up in a squat and was forced to beg for money on the streets.

´As a whistleblower, you don´t just just lose your job´, Addison can tell from experience. ´You also lose your colleagues, friends and family. They turn away from you, because they don´t believe you. But fear seldom provides good guidance. We are being raised with the idea not to stick one´s nose in other people´s business and to keep to ourselves. But injustice is injustice. This can not be tolerated´.
Addison eventually turned to the United Nations. In April 2011, almost 11 years after she disclosed the malpractices at LeisureNet, she found justice on her side and her bosses were sentenced. ´For years I felt like the lonely voice, calling from the mountain top, hearing nothing but the echo of my own words. Now I find myself in the company of policy makers, activists and scientists that support me.

That feels good. With my company, I want to be everyone´s wake-up call. Don´t be afraid, stand up to injustice and become your own hero´.