When people have the ability to voice their opinions and have formal processes available to them why do we so often see that they refrain from doing so?

Several theories of group behaviour, from Janis’s (1972) groupthink to threat rigidity (Staw, Sandelands, & Dutton, 1981), have shown that forces come into play that often limit the amount of voice in group situations.

Voice is a verbal activity that is used to promote constructive change in a status quo (Rusbult, Farrell, Rogers, & Mainous, 1988). Organisational voice is a phenomenon in which people express opinions or thoughts in order to make some sort of organisational change (Hirschman, 1970). LePine and Van Dyne (1998) suggested that this definition allows a distinction to be drawn between voice and other related constructs. For example, complaining behaviour differs from voice in that no change is promoted by the behaviour, andaffiliative behaviour differs in that the focus of the behaviour is on building relationships rather than promoting change. For a verbal expression to count as voice, it must be perceived by the individual as promoting a change and therefore as desirable.

This conception of voice clarifies the theoretical problem of why people would not voice.  Voice behaviour can be predicted by elucidating variables that increase or decrease the riskiness of such behaviour.

Studies of voice have often conceptualised voice as the existence of formal grievance systems, without examining the informal processes (what’s actually happening) that occur in groups to assess the degree to which individuals are engaging in voice or not.  Many have argued that the opportunity to speak out may not necessarily imply the presence of an open dialogue within the organisation but may instead lead to hiding true opinions (Liden & Mitchell, 1988). Let’s look more closely at the specific interpersonal variables that make up group participation activities such as voice behaviour.

Power is an element in virtually all social Interactions.  Power has been defined in various ways in the literature but many treatments tend to single out either control of resources, outcomes and behaviour (e.g., Keltner et al., 2000; Salancik& Pfeffer, 1977) or interpersonal–social status and dominance (e.g., Pratto, Sidanius, Stallworth, & Malle, 1994; Tiedens, Ellsworth, & Mesquita, 2000).  The question of whether to regard power as control or as status is an important one.  Studies of power often use reputational measures, making it difficult to separate the two (see Keltner et al., 2000, for a review).

Empirical research has shown that people’s propensity to freely interact in a workplace setting is heavily influenced by power relations.  People in power have reward-rich environments that are not hindered by external consequences.  A large amount of psychological research has examined what Kipnis (1976) referred to as the “metamorphic effects of power,” a phrase that describes how power holders tend to “become puffed up with their own importance” (Kipnis, 1984, p. 30), pushing their opinions over those of others. Not surprisingly, power has been negatively correlated with interpersonal perceptiveness (Anderson & Berdahl, 2002).  Keltner et al. (2000) concluded that individuals with more power tend to pay less attention to others’ views and psychological states.  In addition, Fiske (1993) showed that high-power individuals tend to stereotype others to a greater extent than low-power individuals, using more heuristics and ignoring individuating information about people. 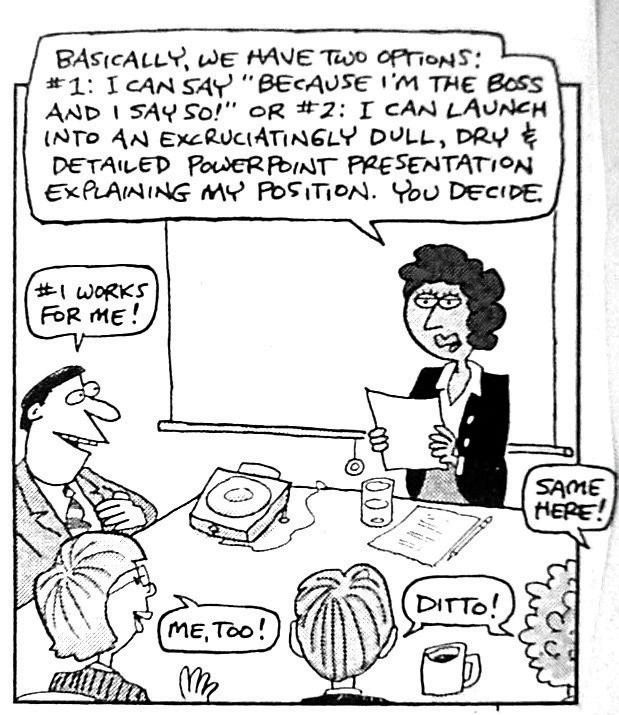 The perceived riskiness of voicing one’s opinion would therefore be low for people with higher power, because of both the lower objective riskiness (i.e., high power means less external consequences) and the lack of subjective ability to perceive opposition (Fiske, 1993).

Studies of power and authority have identified people’s hesitance to contradict figures of authority (e.g., Kramer, 1998; Milgram, 1983), as well as retaliatory behaviours that are directed at individuals who do voice their contrary opinions (e.g., Cortina & Magley, 2003). The extent to which people feel that other people or the group as a whole are imbued with authority will hinder their likelihood of coming forth with views of dissent.  A person who is high in Social Dominance Orientations (SDO) feels that social hierarchies are just and that some people deserve to be in positions of authority over others. In contrast, a person low in SDO sees the world through a more egalitarian lens, tending not to believe in the legitimacy of hierarchies.

The higher amount of SDO a person holds the more influence power will exert in deciding whether to dissent from a group. Those individuals who are low in SDO conversely, will feel the oppressive force of authority. Research suggests that individuals high in power tend to voice their opinions to a greater extent than individuals with less power and that this effect increases with higher levels of social dominance orientation (SDO), the degree to which individuals believe that social hierarchies are justified.

If power’s effect on voice is moderated by the ways people view hierarchy in social situations, then this effect is not simply the product of objective power positions and risks but also contains a social– cognitive component. This moderating effect points to the ways people categorise themselves with respect to their groups and explains how power dynamics may be altered on the basis of individual attitudes (Sidanius & Pratto, 1999). This has implications for any theory of the effects of power and calls for a view of power not only as a resource and status variable but as one that describes global views of how society is (or should be) structured.  It’s helpful, and hopeful to remember that dominance orientations have a degree of plasticity and are therefore not static.

If a manager were trying to promote equal participation in a group, research suggest that part of his or her task would require promoting an egalitarian climate within the organisation, one that provides not only a structural possibility for voice but also a group ethic that deemphasizes the dominance of some actors over others. The ability to do this would be contingent on the plasticity of SDO. How people voice their concerns in groups must move beyond simply observing participation programs and interventions. Even when participation is allowed, and even encouraged through incentives, people may refrain from giving their opinions owing to group and cognitive factors that are extrinsic to the content of the group task (Bedeian, 2002; Keltner et al., 2000). Briefly put, speaking up is not an automatic result of removing barriers to expression but often requires the right kind of social and attitudinal framework to nurture expression.